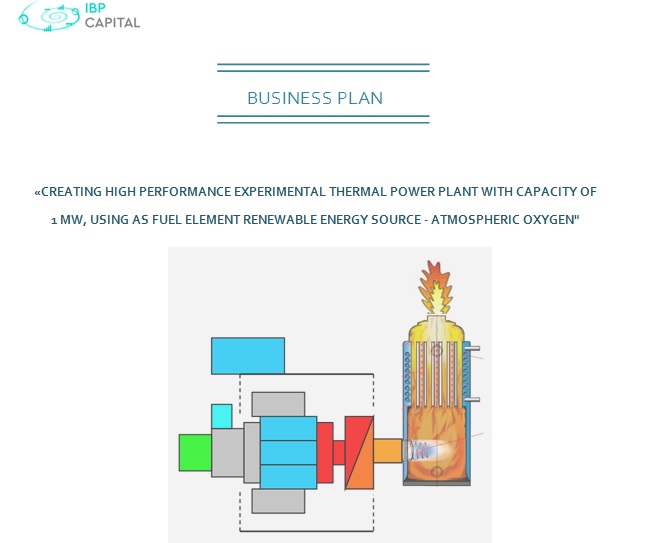 This project provides a creation a highly effective alternative source of renewable energy.

The main purpose of the project – development of oxygen energy technologies complex and the creation of the world’s first environmentally friendly thermal power plant (power module) of new generation with the capacity of 1 MW running on renewable fuel – an atmospheric oxygen.

This innovative development undertaken by the State Enterprise “Scientific Research Institute “Helium” and its partners is able to turn over generally accepted ideas on energy in general. Thermal power plant that runs on oxygen structurally simpler than other thermal power plants and the cost of energy generated is significantly lower than using any other source of energy, and less than $ х.ххх / kWh.

In this project, the ionization process pure oxygen first used to generate heat without simultaneous use of a hydrocarbon or any other fossil fuel. Development refers to the new type of renewable alternative energy, which is a significant difference from existing analogues is the cheapness of electricity generation, which is lower in cost than electricity produced even in nuclear power plants.

For the realization of this project funding in the amount of $ хх,х million is required.

Terms of implementation of the proposed project are хх months.

The introduction of the product created as a result of this project will make decisive step in providing cheap thermal, mechanical and electrical energy to all of its consumers, without exception, on the Earth.

The main advantages of this power station are:

In connection with the completion operating cycle certain nuclear power plants and their possible decommissioning of electricity deficit, which has already now, it will be more pronounced in the future. This project will create conditions for the construction of new generation power plants based on innovative principles generating electricity, and has no harmful effects on the environment.

The proposed project in the future is almost unlimited possibilities for scalability in Ukraine and all over the world, and may imply several stages of its development (zoom).

In this project we have focused on solving the priority task – creating a pilot demonstration model of universal thermal power plant (power station), running on renewable sources of energy – atmospheric oxygen.

Realization of this project, its implementation, will be engaged company SDTO “Plasma” (“Special Design and Technical office “Plasma”), which we propose to create for these purposes.

After this task the further development of the project can proceed in several ways:

1). Sale of licenses and patents on the technology of the project to third parties.

3). Organization of construction of such power stations around the world to directly provide consumers with cheap energy.

Proposed project will maximally expand possibility of providing various kinds of energy all of its consumers in the world, including the less developed and developing countries, and also consumers in remote and inaccessible areas.

Established companies can become the world’s leading supplier of renewable energy in 2027.

MAIN INDICATORS OF THE FIRST VERSION OF PROJECT REALIZATION

Volume of investment for the project: хх ххх ххх USD.

Payback period: the project will be paid off in х years.

MAIN INDICATORS OF THE SECOND VERSION OF PROJECT REALIZATION

Volume of investment for the project: х ххх  хххUSD.

Payback period: the project will be paid off in х years.

Profit from the project realization during 9 years from the start: хх ххх ххх USD